The cost of living, employment opportunities, schools in the area, home prices, and emotional attachments are all important factors when deciding on where you want to live (at least for those that have the luxury to choose). But crime statistics always rank at the top – Californians want to find the safest cities in California to raise their children.

This is entirely natural. You want to freely walk home at night, know that there’s a minimal chance of your home getting burglarized, and not worry about your kids’ safety every waking moment. Unfortunately, a majority of Californians regularly report not being safe in their communities.

Because of this, choosing a safe place to live is essential to sleeping soundly. To help you make plans, we have provided a list of the 15 safest cities to live in California. But, before we get to the list, let’s see how California compares to the rest of the nation and how safety is determined.

California vs the Rest of the US

Is California a safe place to live? Regrettably, no, California is not one of the safest states. By volume, the most crimes are committed in California annually out of the entire US; that is to be expected as it is the state with the largest population. But even when adjusted for its population, CA still ranks in the upper half of states for crimes committed per capita.

However, crime is often hyper-localized so there can be large discrepancies between cities. Thus, even though California is somewhere in the middle of the pack when it comes to crimes committed per capita, it still has some of the safest cities to live in the US.

Compiling FBI statistics, Safewise issues an annual report on the rate of violent and property crime per 1000 residents in California towns and cities. This means that other public safety issues, such as natural hazards or COVID -19 infection rates, are not counted to determine the safest cities in California.

Violent crime includes aggravated assault, murder, rape, and robbery; property crime encompasses burglary, larceny-theft, and motor vehicle theft. The safest place to live in is the one with the lowest combined rate per 1000 residents, but we’ll also separate both statistics so that you have better insight.

As a side note, places that did not submit a crime report to the FBI are excluded from the rankings. Now that you understand how we define safety, let’s get to the list of the 15 safest places in California.

Danville, CA comes in as the safest city in California. Located in Contra Costa County, it has a lower population than Rancho Santa Margarita but a higher one than Moorpark (no. 2 and 3 on the list), at about 44 000 residents. In 2020, it was named the safest town in California and is so again in 2022. It has a violent crime (VC) rate of 0.5 and a property crime (PC) rate of 5.3, combining for 5.8.

Danville is consistently one of the safest cities in California. Namely, it was no. 1 in 2020, no. 3 in 2021, and once again tops the chart. However, safety comes at a price – Danville is an affluent community and the cost of living index is approximately 2.5 times higher than the US average.

Situated in Orange County close to the Santa Ana Mountains, Rancho Santa Margarita is the second safest city in California for 2022. It has a population slightly below 50 000, a multitude of homeowners associations, and a significantly higher rate of people holding bachelor’s and higher degrees than the rest of CA.

It is no big surprise that Rancho Santa Margarita is one of the safest places to live in California. The violent crime (VC) rate per 1000 people is 0.4 and the property crime (PC) rate is 5.9, combining for only 6.3. Rancho Santa Margarita took the first spot in 2021, but residents shouldn’t be discouraged that they are the second safest town in California in 2022 - the combined rate for 2021 was 6.7, so it has become safer. It’s just that Danville has done even better.

Located in Southern California in Ventura County, Moorpark is one of the smallest cities on the list with a population of around 37 000. However, it is also one of the fastest-growing ones, which can be expected with such a low crime rate. The VC and PC rates of Moorpark are 0.5 and 6.2, respectively, totaling 6.7.

A second representative from Orange County (you will start noticing a trend), Aliso Viejo is located in the San Joaquin Hills. It has a VC crime rate of 0.5 and a PC crime rate of 7.6, equalling an 8.1 crime rate total. Aliso Viejo is a suburban community, but sitting right next to Laguna Beach means that most benefits of an urban lifestyle are easily accessible.

The first city from San Diego County to make it on the list of the safest places to live in California, Poway has a VC rate of 1.1 and PC rate of 7.4 – for a total of 8.5. Poway is an unincorporated community and only became a city in 1980. Approximately 50 000 people call Poway home.

Poway residents should be proud, as it has risen nine places on the list of the safest cities in California since 2021. Way to go Poway!

Located approximately 37 miles SE of Downtown LA in Orange County, Yorba Linda comes in at number 6, with a VC rate of 0.5 and a PC rate of 8.4, combining for 8.9. A relatively small city (and much smaller in the past), Yorba Linda is known as the birthplace of former president Richard Nixon.

Located in Los Angeles County, Rancho Palos Verdes has other things going for it aside from safety. Founded on the bluffs atop the Palos Verdes Peninsula, it provides a breath-taking view of the Pacific Ocean, Santa Catalina Island, and Los Angeles itself. It also has some of the best horse and hiking trails in all of California. 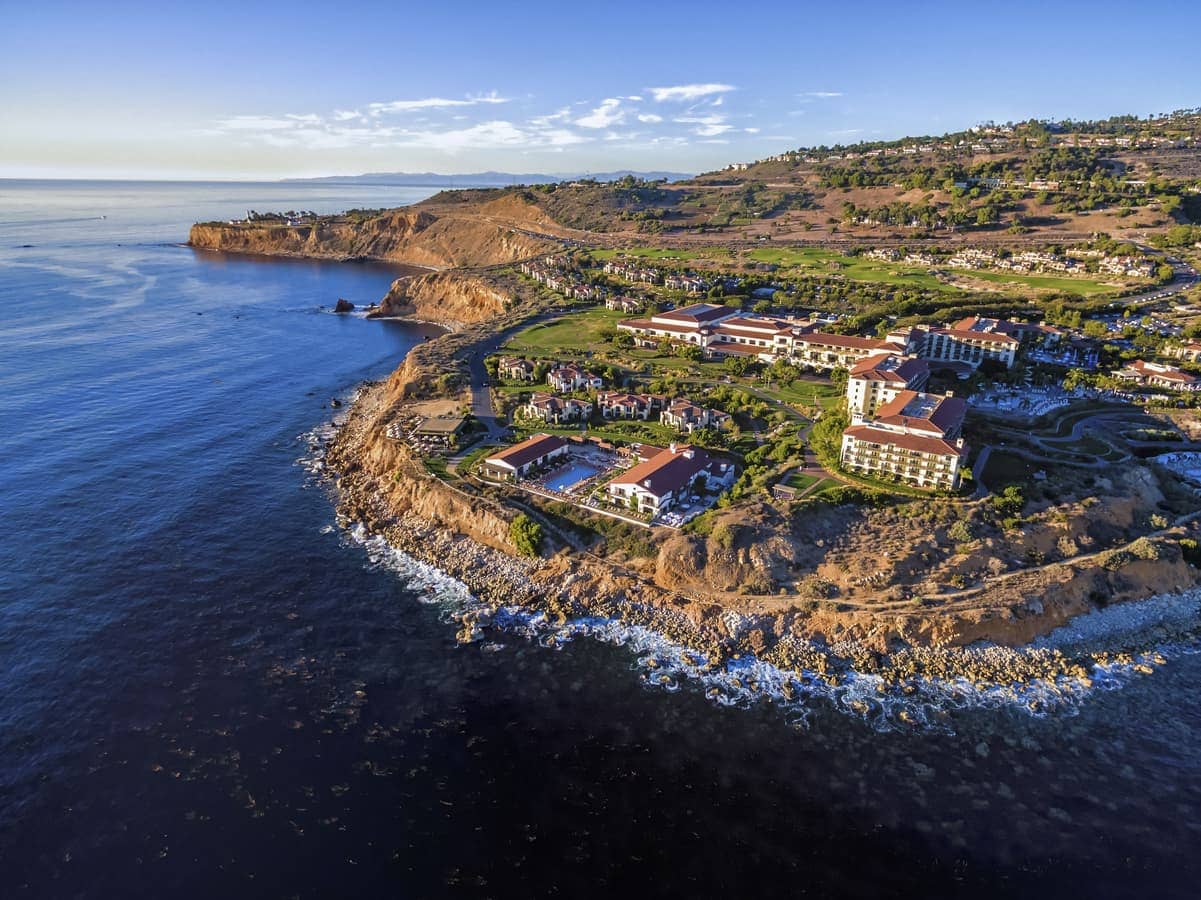 But, we’re here to talk about safety – Rancho Palos Verdes has a VC rate of 1.0 and a PC rate of 8.1, combining to a reasonably low 9.1. Unfortunately, safety comes with a price tag once again. The Rancho Palos Verdes zip code is one of the most expensive locations when it comes to property prices.

Like the bordering city of Aliso Viejo, Laguna Niguel comes close on the heels of its neighbor as one of the safest places to live in California. It has a VC crime rate of 0.6 and PC crime rate of 8.7, totaling 9.3. Another affluent city, the median household income of Laguna Niguel nearly doubles the US average.

The first larger city on the list, Mission Viejo has a population slightly below 100 000. Unsurprisingly, it is also located in Orange County. It has a VC rate of 0.8 and PC rate of 9.0, for a total of 9.8 – the same total as in 2021. However, the violent crime rate has risen by 0.1 and property crime fell by 0.1 since last year.

Asides from safety, there is more that makes San Juan Capistrano interesting - it can be considered the birthplace of California’s wines. Namely, it is here that Franciscan missionaries planted the first vineyards in California in 1779. While it is not a famous American Viticultural Area in its own right, it has left a mark on the history of winemaking.

With a population of around 220,000, Santa Clarita is the largest city on the list by a large margin. Even with the largest population, it boasts a respectably low VC rate of 1.3 and PC rate of 9.1, to combine for 10.4. It is located in Los Angeles County and is often considered a satellite or edge city.

Temple City is a new entry on the list with a violent crime rate of 1.4 and property crime rate of 9.0, for a combined 10.4. It is located in Los Angeles County and has a population of 36,000 people. You may have noticed that Temple City has the same total crime rate as Santa Clarita. We have decided to place it lower on the list because the VC rate is higher.

The second representative from San Diego County and another newcomer, Santee comes in as the 13th safest city in California. It has a VC rate of 2.8 and a PC rate of 7.7, adding up to 10.5. However, while Sante has a low total crime rate, the number of violent crimes committed is the highest on this list.

On the plus side, the property crime rate fell from 13.7 in 2021, but the violent crime rate rose from 1.7. Still, Santee is one of the safest areas in California and deserves to be on this list.

Yet another representative from Orange County, Lake Forest comes in at no. 14 on our list. It has a VC rate of 1.1 and a PC rate of 9.8, adding up to 10.9. Unfortunately, Lake Forest barely managed to hold on, as it was no. 5 last year. While still one of the safest cities in California, the rising crime rates are worrisome.

As a side note, if you are wondering about the name, the immediate area of Lake Forest is not actually forested land. The forest for which it got its name is located relatively close and, interestingly, consists mostly of eucalyptus trees. However, it is situated between two man-made lakes, so that part of the name holds true.

Thousand Oaks is the third and last newcomer on the list, and the second entry from Ventura County. It has a VC rate of 0.6 and a PC rate of 10.4, for a total combined crime rate of 11.0. It is also the second-largest city here, with a population of approximately 126,500 people. Good job Thousand Oaks and we hope to also see you here in 2023.

Murrieta from Riverside County just barely didn’t make the list, but it deserves a mention. If for no other reason than because it would be the only representative of Riverside County. It has a violent crime rate of 0.8 and a property crime rate of 10.2. The total is 11.0, the same as Thousand Oaks, but because the VC rate is higher in Murrieta, it couldn’t beat Thousand Oaks to make no. 15 on the list of the safest cities in CA.

According to studies by the Public Policy Institute of California, overall crime rates in California were on a downward trajectory during the height of the pandemic. In 2020, property crime rates dropped by 8.9% and violent crime rates by 0.5% compared to 2019 – comparable to the rates of the late 1960s.

However, preliminary data from 2021 shows an uptick in crime. The most concerning is the rising homicide rate, as well as auto thefts and break-ins quickly becoming popular crimes. On a positive note, even with the ‘post’-pandemic increase, crime rates are still lower than they were pre-2010 when major criminal justice reforms were introduced.

If you wish to move to one of the safest places in California, you’ll likely need to sell your old home. The first thing you should do is contact SleeveUp Homes. We buy houses across Southern California for top dollar. We’ve seen too many people get low-balled and pressured by wholesalers and investors, which is why we always give better offers than them.

Because we are direct buyers, you won’t be wasting any money on realtor commissions. And you don’t have to invest in repairs or remodeling – we’ll buy your home as-is. Request a cash offer and see how we can help finance your new life in one of the safest cities in CA.