The Housing Shortage Is Affecting the Price of Condos

A historical unbalance between supply and demand in the housing market is creating a ripple effect. The demand for a single-family home has brought the prices to the point of unaffordability, so many people opt for other means of housing. That is why the condo market has been booming in the past few months.

As the median home price surpassed $400,000 and the pandemic is slowing down, people have two motives to buy condos. Firstly, offices are opening once again and people want to be closer to them, and near the eventful downtown. There is less fear around being in crowds and people are actually starting to miss human interaction.

Secondly, single-family homes have become too expensive for a median-earning household, and many of them have to find affordability elsewhere. Rather than renting, which is preventing wealth gaining and is generally more expensive, people have been buying condos in all American metro areas.

The Numbers in the Condo Market 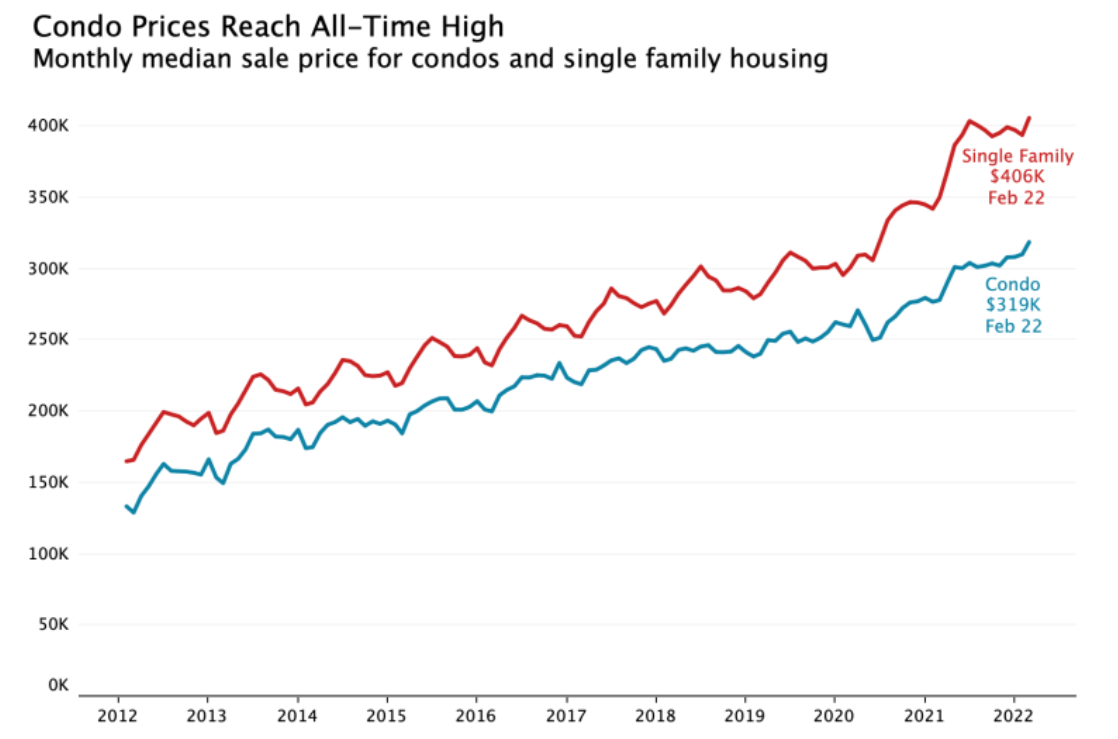 February numbers show that condo prices jumped to a record high median price of $319,000. This is 22% higher than prices from early 2020 before the pandemic had started. An average condo in the US is around 880 square feet, while the average single-family home is just shy of 2,500 square feet. With prices and sizes compared, it is obvious that condos are overpriced at the moment.

Supply shortage didn’t stick to the houses - the condo market is experiencing a record lack of inventory. Compared to February 2021, condo supply fell 28% and new listings are down 6.1%, which is a bigger drop than in the market of single-family homes.

The average number of condo sales fell 5.3% year over year but rose 13% compared to February 2020. This is explained by the trend of moving to places with more space, during and after the lockdown. People didn’t want to be cooped up in a condo when they didn’t have anywhere else to go.

Bidding wars became a standard procedure during the homebuying process, and the condo market is following that trend. A typical condo is sold after 30 days on the market, but more than half of all condos sold in February didn’t wait for the third week.

Bidding wars were happening in almost 65% of condo sales nationwide, and 41.1% of all listings sold over the asking price. The gap between the asking and selling price for condos is the largest in the Bay Area, primarily in San Francisco, where an average of 5% more was paid above the asking price.

With the mortgage rate going above 5% for the first time in the last 10 years, and the prices of already expensive single-family homes in SoCal on the rise, the condo market boomed. An average condo in Los Angeles has less than 850 square feet, and with new construction is getting smaller.

This does not affect the rising prices, which increased 17% compared to 2021. The median price climbed to $630,000 in February 2022. Nashville, TN saw the biggest increase in the median price - which is 200,000 dollars less than in Los Angeles.

The rising mortgage rate should dampen the demand in the housing market, and discourage the investors who are buying to rent. It seems like inflation is making it impossible to create new, affordable housing. The spring homebuying season is beginning, and the demand for condos is expected to stay high during the next few months at least.