Even Closing Costs Rose from 2021, but Some Buyers Are Still Optimistic

Homebuyers have had a tough time in the last few months since the Fed’s decision to increase interest rates created a ripple effect on borrowing costs. Not only did the 30-years-fixed rate rise higher than 5.1%, but the closing fees increased by 13.4% year over year. Closing costs are just another thing putting pressure on the consumers and their financial abilities.

Homebuyers have to budget almost $7,000 on average across the US, but this number is a small one when compared to the real ones. For example, the District of Columbia has the highest closing costs, where an average homebuyer pays almost $30,000 for a median-priced home. California’s prices for closing deals go around $7,000 with transfer taxes, which is about 1% of the selling price.

But the closing costs alone wouldn’t make such a burden for the borrowing homebuyers had there not been a rising rate that adds hundreds of dollars to their monthly bill. Some data show that people who lock in today’s rates pay $400 a month more than those who bought their house in March 2021 - that is $4,800 a year. To compare, around 30% of Americans earn $4,100 a month.

50% of House Hunters are Optimistic 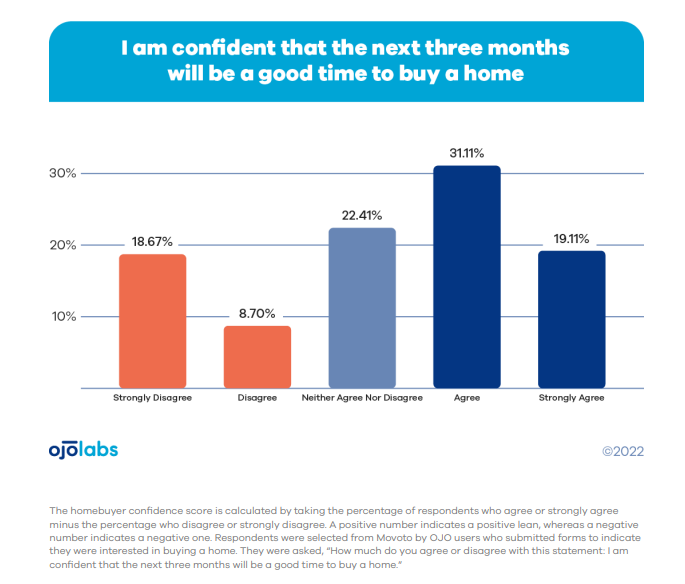 On top of the abovementioned homeowning costs, the inflation rate of gas prices, food, and electricity eat up the budgets of homeowners and those who would like to become ones. All of this is frustrating, but some records show that the buyers are still optimistic about the market.

OJO Labs, a real estate platform, published a survey that shows 50% of their respondents are ‘’confident that the next three months will be a good time to buy a home’’. They collected the answers from 1575 people currently searching through the market, and less than 30% showed pessimism.

The lowest number of respondents said they ‘’disagreed’’, and only 22% strongly disagreed, and both numbers are falling monthly. The highest number of people agreed with the statement, and some of them strongly agreed, which makes them the furthest from pessimism.

These data are significantly different from those shown in Fannie Mae’s survey published in early April, which reported more than 70% pessimistic respondents. The pessimism is seen on the other side of the housing market as well, with home builders’ confidence falling for the fourth month in a row. Inflation creates volatile price movements, making it impossible for precise assessment and agreement.

However, it seems like the rising rates created some sort of a strong finish for the hot market. In the next few months, people are going to hurry up and lock in the rates before they go even higher. After that, high rates and inflation will eat up too much of the potential homebuyer’s budget, so the prices will have to fall. Rochester, NY and Toledo, Ohio are one of the first places with a reported decrease in the median home prices. Listing prices fell in Los Angeles but are still standing high above $980,000.