February 2022 brought more demand and higher prices to the California Housing Market, due to geopolitical events, a shortage of inventory, and a restoring, post-pandemic economy. The interest rate has gone down to 3.76% at the end of the month, after a constant increase during January and most of February. 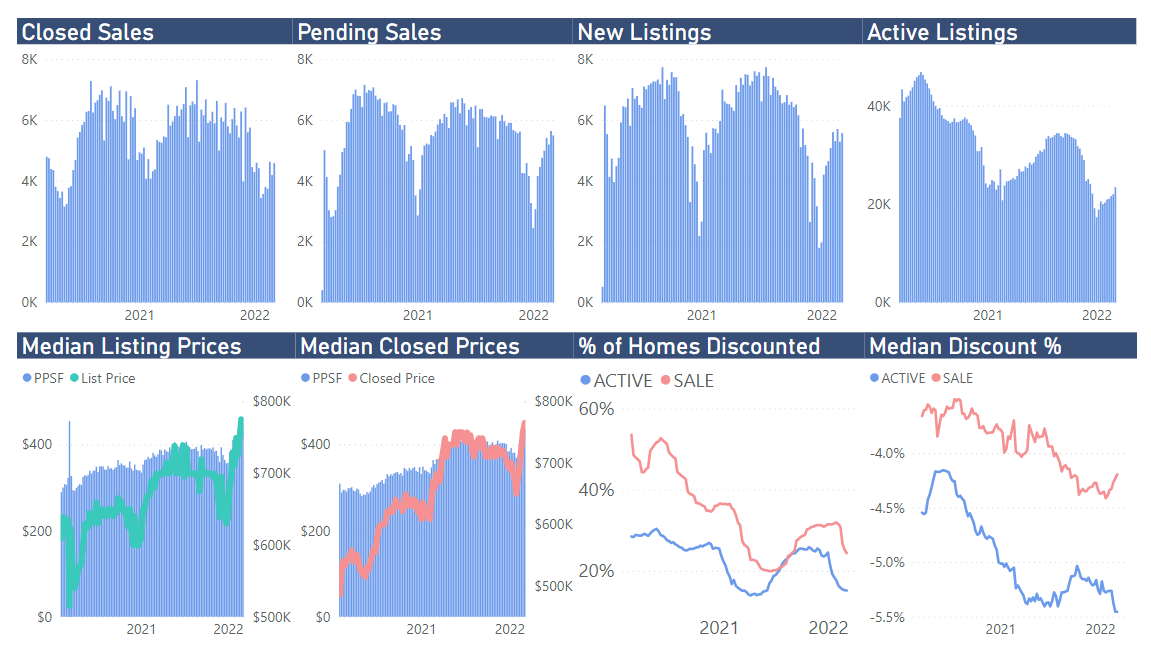 According to predictions from the beginning of the year, February was supposed to be a month of rising mortgage rates, which would have caused a small decline in demand. However, recent geopolitical events created a short-term shift from that course.

The Russian attack on Ukraine has complicated the Fed’s plans to deal with the rising inflation and briefly prompted the decrease of an otherwise growing 30-year-fixed mortgage rate. This made the demand go even higher than expected.

The median price in the entire country rose 16% year over year, but the growth is slower in California with a 9.4% rise from January of last year. This is probably because many metro areas in the Golden State have been experiencing an exodus ever since the start of the pandemic and telecommuting.

Single-family houses around Los Angeles and San Francisco are somewhat cheaper than they were a month before, but this is not the case in other metropolitan areas. Demand has stayed high, because of the popularity of the state, new incomers from other countries, and the rich job market.

The migrations out of California are not making the market more buyer-friendly. The median sold price of existing single-family units is $1.200.000 in the San Francisco Bay Area. The paradox of California losing residents to other states, while at the same time having the biggest problem with a lack of inventory isn’t a paradox at all; it is about the lifestyle of younger generations.

Namely, many millennials living in California are renting a place and living with roommates. Many of them are growing up, have a steady job, and are ready to become homeowners - some move to a different state, but others stay in California.

Additionally, the recovering economy and a straightening job market are not helping with creating affordable housing. The exodus of Californians, which prompted surging prices in Utah, Idaho, Florida, and Texas, is slowing down as we are approaching a post-pandemic economy. Things are going back to normal slowly and steadily, and many people want to be in the big metro areas when the (new) normal finally comes.

Reports from both the US and California have been showing a drop in new listings and home sales. It has been a fact for quite some time now that America does not have enough homes for interested buyers. California is the state with the biggest gap between demand and supply, which makes it one of the most expensive housing markets in the States.

The supply of homes is at a record low, the pool of sellers is soon to be exhausted, and home builders are having trouble with rising inflations, as well as lack of materials. There have been reports of exceeded spending for residential buildings, but it does not mean that the builder’s confidence is up. Unfortunately, it can also mean that the planned budget did not expect such high inflation on building materials.

The political tensions are rising due to the Russian-Ukrainian war, which is also affecting record levels of bidding wars in the US. People are so eager to buy a home after a sudden decrease in the interest rate, that a home spends just around 10 days on the market.

Nevertheless, it is expected that the interest rate will not go down for long. Inflation is getting higher and it is making it impossible to create affordable housing, so the interest rate has to rise. For the time being, the demand is ever-rising, supply is staying low, and the prices are not staying put.